Netty Wheeler
22:25 13 Jun 22
The Crook lodge dental surgery offer a very professional, personal and seamless service from the moment you enter the door right through to all treatments be it a check up, a visit to the hygienist or a more involved procedure. I would particularly like to thank Veronika today for the superb clean she gave my teeth and advice on how to maintain healthy teeth and gums for the future.I have been a patient here for over 10 years and wouldn’t go anywhere else despite my journey being an hour and a half….. totally worth it for their expertise, advice and support.Thank you

R J
11:22 09 Jun 22
Excellent customer service and a lovely team of dentists and hygienists.Have been with them for years and was never unhappy about anything.Moving out of the area and very sad that my kids will miss this excellent dental care.Wishing all the team very best of luck!

Nina Vilkho (Thanjal)
16:55 30 May 22
Excellent dentist. Been a patient here for years and always very happy with my treatment. Dr Sim Mangat fixed my teeth to give me a perfect smile!

Kaz Bosali
14:00 17 May 22
I was impressed by Dr Kajal Tutt's professionalism and knowledge. She went above and beyond for me, making me comfortable and advising me on the right options moving forward. 10/10 would recommend!

Elisse May
20:07 24 Mar 22
I have never felt so welcomed, my dentist Simba is friendly and makes me feel so comfortable but also very professional! Gives me the best tips and advice on how to receive the results I want. He told me every detail there is to know and gave me different options on wanting composite bonding and teeth whitening. I am now in the process of getting this done and cannot wait for my results! :)

Maria Rodrigues
12:45 03 Mar 22
My first time at this dental practice and I can say that I felt absolutely welcomed . I found here great professional support,excellent advise and great care . Obviously I was petrified at first but Dr Simon and nurse Carmen absolutely relaxed me with their great care and knowledge. I felt safe and not rushed at all.The reception team , Lyn, Ellie and Jenny are amazing too, giving me the best advise regarding parking and made sure I was fine all the way.I can't thank them all enough for the care and encouragement. God bless you all .

siana caiels
15:34 12 Feb 22
This is my Nan’s dentist and she would highly recommend! Dr Mangat gave lots of helpful advice and reassurance as she was nervous about her treatment. She was fitted with a top denture which is the perfect fit and very comfortable.Thank you to all the staff for looking after her so well!

Bibi A
19:31 01 Feb 22
Receptionists friendly and polite. My dentist is exceptionally good, cannot thank her enough

Aminah Metz
12:35 31 Jan 22
Recently visited the hygienist at crook log dental practice and I was overwhelmed with the service I received from Veronika specifically. She was very gentle but extremely thorough also. She explained in detail what she was doing while she was doing it and I felt extremely educated on how to maintain her good work. She took her time to explain correct brushing techniques and various maintenance methods to get the best out of my teeth. She was really great!!Prior to the hygienist appointment, I had a consultation with Dr. Tatt who was equally as great! Her examination was thorough and she gave some great insightful tips on how to prevent cavities from developing. Thanks to both

Geoff Brinkler
15:17 21 Jan 22
Come here for a routine check up all the time and couldn’t think of a better place. Every single one of the staff go the extra mile really professional service from the moment you enter with the lovely welcoming reception staff to the knowledgeable dentist and nurses. I highly recommend this practice which is run excellent.

Romel Mitchell
22:15 14 Jan 22
My family and I recently registered at this dental surgery and being that we have not had good experiences with dentist in Bexley I had mixed feelings but after my two sons, daughter and my self saw our Dentist Dr. Tatt, we all came home extremely happy. I almost fell asleep in the dental chair. She was excellent 👏 and I did not even know she was finished. She massage my gum while applying the injection 💉 and I did not feel a thing. Best dentist 😍 ever.

Julie Tomkins
10:32 20 Dec 21
Kajal Tutt is Amazing!! So friendly and goes above and beyond!! Very grateful to have her as mine and my family’s dentist.The practice staff are also very friendly and the building is lovely and new inside.

Correen Campbell
16:27 16 Nov 21
I have been attending the clinic for 7 years and everyone is amazing from the reception staff, hygienists and dentists. They have an amazing understanding and really care. My dentist Sim is incredible and a true artist. Worth every penny and I have no dentist fear now because of team.

Stuart Pettman
11:40 30 Oct 21
Had a complicated procedure today. In addition I had an issue with antibiotics that my surgeon prescribed and Ellie and Jenny at Reception were so helpful in helping me sort this out. Dr Sim Mangat did my tooth extraction and it went smoothly. Ilham, the Nurse looked after me very well. Thank you all.

Janet Cooper
14:07 20 Oct 21
Thank you so much to Dr Simrath and Roya for all you kindness today. I had a very painful wisdom tooth, and was very nervous about having it removed but they were both absolutely brilliant with me and the tooth was removed without any problem at all. I have always been really pleased with the service I have received from the practice and would thoroughly recommend them.

jason mcanaspie
08:21 20 Sep 21
Just wanted to say a big thank you to Simrath. He came in on Saturday to remove an extremely painful wisdom tooth. I felt no pain at all and the tooth was out in a few minutes. I now have a smile back on my face. Hes a very nice Dr who explains everything in great detail.

Rebecca McWhinnie
17:39 20 Aug 21
Had a great appointment with Dr S Mangat and Danielle today, couldn't have been looked after better and made to feel super comfortable and relaxed. Have been with Crook Log always and have always been happy with the results. After my composite veneers today I couldn't be happier and more smiley with the results - thank you both so much!

serif caltili
17:31 17 Jun 21
If you are looking for a dental hygienist veronika is the best… you may have to wait for an appointment but she is well worth waiting for…very professional informative and friendly.Reception staff very friendly and welcoming… will definitely be going back.
See All Reviews Write a review 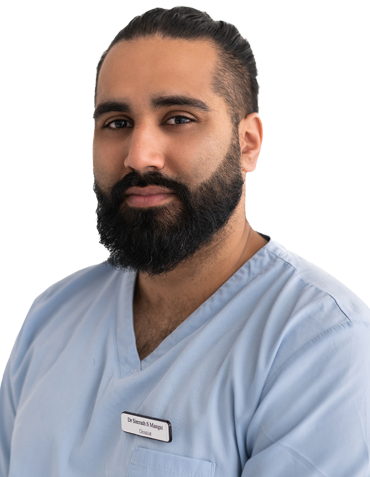 Currently Dr Mangat is undertaking a one year programme in aesthetic restorative dentistry called Totally Aesthetics, and has become a premier provider of Invisalign as well as being trained in the use of the Smilefast system in line with his ethos of constantly learning to improve his service for his patients.

Furthermore to ensure he can offer his patients a complete experience in aesthetic work he is also trained in foundation and advanced botulinum and dermal fillers treatment.

Since graduating, during his first year, Health Education England awarded him with the Best Case Presentation award for the South East London deanery. After this, he also won the Best Foundation Dentist national award from the Faculty of General Dental Practitioners (Royal College of Surgeons).

Dr Mangat has always believed in exceeding and developing his skills, and as such he completed a year of Core Training in the Oral and Maxillofacial Surgery Department at a major trauma centre, Kings College London – during which he has developed upon his surgical skills.

He has also presented at an international dentistry conference in Berlin. As a member of the maxillofacial team, he also was 1st author on a published ePoster at the British association of oral and maxillofacial surgeons conference 2019 about the management of epistaxis, as well as being a 2nd author on an Oral presentation on Cycling Incidents managed by the OMFS team at KCH.

Prior to this, as a undergraduate he was awarded multiple awards for his work with the Student union and research, examples included the Honorary Life Membership and Full Crowns, to name but a few. Furthermore, he has held positions in multiple national dance teams as a dancer/captain/coach, in the process securing 2 first place awards at national competitions and three 2nd place awards.

In his spare time, his hobbies include; cricket, dancing, weightlifting, cooking and hiking.

“Recently I have had RESTYLANE Dermal fillers injected into my lips to make them...”

“I have always been conscious of my teeth and always wanted that “perfect smile”....”

“I have never been happy or confident about my smile since I was a...”

“I had originally chipped my front tooth a long time ago and had it...”

“During a recent holiday, I had a fall, landed on my chin and damaged...”

“I have been Dr Chawich’s patient for about 10 years and have always had...”

“I was very self-conscious about my crooked front teeth even after having them whitened...”

“At the age of 76, my few remaining upper teeth became insufficient and eating...”

“I had my teeth whitened by laser and home moulds and also had a...”

“I am a patient of Dr Khan’s and now have amazing front teeth! Went...”